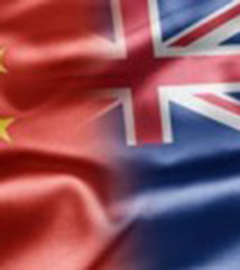 China Ties with NZ Get Closer

China has announced that for the first time it will allow direct trade between the renminbi and the New Zealand dollar, only the fourth currency permitted to do so. The move further strengthens the relationship between the two countries and comes after China recently overtook Australia as New Zealand’s largest trading partner.

Previously, exporters had to go through a third party exchange, usually in US dollars, in order to conduct transactions.

The People’s Bank of China, the Reserve Bank equivalent, has appointed Westpac and HSBC Australia to act as the “market makers” for the currency pair, Bloomberg reports. The move is expected to slash currency-related costs to exporters and importers.

For China, it is a further step towards the internationalisation of the renminbi (of which the yuan is a unit of currency in the same way a pound is a unit of sterling) and will boost global usage of the yuan, particularly since the New Zealand dollar is one of the most traded currencies in the world.

In New Zealand, it is seen as a diplomatic coup and further evidence of Aotearoa’s favoured status in China. The other three currencies with directly tradable currencies are the US dollar, the Australian dollar and the yen.

“Direct trading will increase the integration between the New Zealand and Chinese financial systems and deepen the economic relationship between the two countries,” Prime Minister John Key told Bloomberg.

Trade between the two nations has surged 29% to $18.86 billion in the 12 months to January, says the news agency. Exports to China were worth $9.97 billion last year.

Both countries are seen by the markets as long-term growth stories, underpinning investor demand for the kiwi, which is presently worth US86.4c (well above the 10-year average) and is expected to reach parity with the Australian dollar this year.