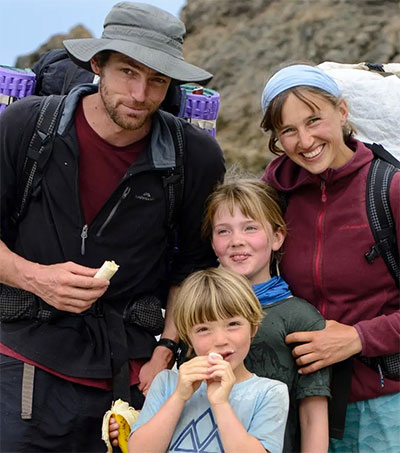 Children Walk From One End of NZ to the Other

Jonathan Rapsey, six, and Elizabeth, nine, are on track to become the youngest to walk the 3000km Te Araroa trail, which runs the length of New Zealand, having completed the entire North Island a few days before Christmas.

The siblings have walked more than 1200km from Cape Reinga since October when they set out with their parents, Chris and Jorinde Rapsey.

The children are being home-schooled on the Te Araroa trail, which ends at the small seaside township of Bluff.

Jorinde Rapsey said her children’s daily energy and enthusiasm was impressive and both kids seemed “really happy” on the trail, with the greatest conflict so far which flavour muesli bar the family would eat each day. “At the start the children were tired and found some parts hard but now they are loving it,” Jorinde said. “It amazes me that at the end of a long day Jonathan still jumps around full of energy … overall they have just been really happy.”

The family was averaging 20km of walking each day, Jorinde said, though occasionally they had clocked 30km. At time of writing the Rapseys were on the Queen Charlotte section of the trail at the northern tip of the South Island, after taking the ferry from Wellington to Picton on 21 December. The Rapseys are aiming to reach Bluff in March 2019.

This summer more than 1000 people are walking the entire length of the trail and hundreds of thousands of people walk sections of it each year.