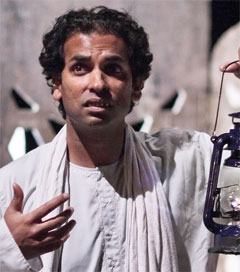 Characters Screaming to Get Out

Award-winning actor New Zealander Jacob Rajan plays 17 different characters in the play Guru of Chai, which was recently performed Off-Broadway in New York. Rajan is the only actor in the play, which is a production of the Indian Ink Theatre Company. “It’s a romantic thriller – a storytelling piece – and the storyteller is a dubious spiritual guide,” Rajan said. Indian Ink has won two Fringe First awards at the Edinburgh Festival Fringe, the largest arts festival in the world, and has received great response in New York. “We take about two years to put a show together,” Rajan said. “So by that stage, it isn’t a question of getting into character, it’s the characters are screaming to get out of me.”