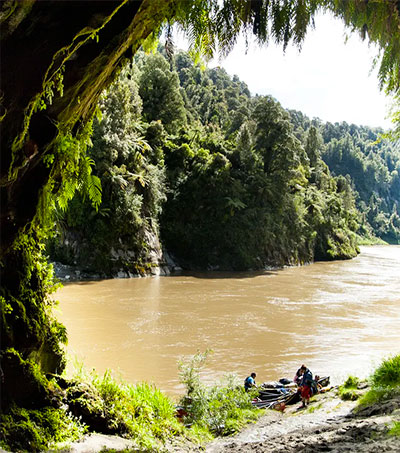 “The Whanganui [River] is so important in Māori culture it has the legal rights of a person. A canoe trip along its forested valley proves a great way of getting to know it,” writes Peter Carty in a travel piece for The Guardian.

“I have spent three days on the Whanganui River in New Zealand’s North Island,” Carty writes. “The Whanganui is the country’s longest navigable river, yet it is notable for more than that – because this is a river that is also a person. In 2017, local Māori gained a ruling to give the river the legal status of personhood. ‘The river has always been a living entity to us,’ Māori campaigner Gerrard Albert told me.

“[Albert] believes the river’s status will protect it: ‘Everyone has to be conscious that the river has the right to continue to be in a healthy state.’

“In 2014, the Te Urewera wilderness area on its eastern side also assumed the rights of a legal person. And last year nearby Mount Taranaki gained the same status. Māori believe there are no boundaries between themselves and the natural world: it is a continuum.

“The Whanganui rises near Mount Tongariro. According to Māori legend the river was created after Mount Taranaki ran away to its present position on the east coast and left a gash behind. Afterwards Mount Tongariro healed the wound with water and the Whanganui was born.

“At the Māori settlement of Tieke Kāinga, we’re to sleep in the community’s marae. After landing we take part in a powhiri, with its kaitiaki, Woody Firmin. Part of this means us singing a song – our Frère Jacques is incongruous, but well-received. Then it’s [time for] a hangi.

“The final day brings the rapids. Oblivious to instructions, I paddle left instead of right and hit [a] rock. Notwithstanding my involuntary baptism I can see why – even though it is not actually a walk – canoeing or kayaking the Whanganui is one of New Zealand’s 10 Great Walks.

“Returning to the tumult of the world is hard, but it is consoling to recall Firmin’s farewell: ‘You’ll always be a part of the river now. And you’ll be a part of us, too.’”