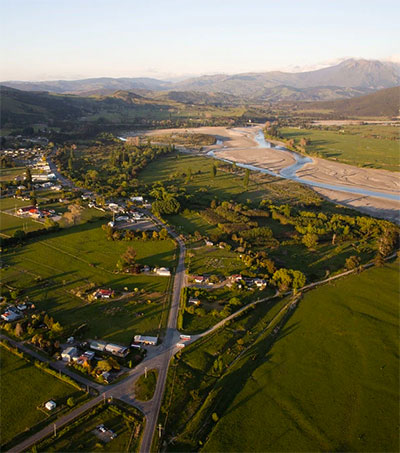 Can Marijuana Save Ruatoria?

As New Zealand prepares to legalise the production of medicinal cannabis, companies are racing to secure the first and biggest slices of a market that has proved lucrative in the United States and Canada. One of those companies, Hikurangi Cannabis, is also racing to save the town of Ruatoria, population 750 and falling.

“You’ve got whole entire families leaving because there’s no work and it’s a struggle to live,” said Donette Kupenga, owner of Ruatoria’s only cafe, Hati Nati. “Employment would make a huge difference.”

And so Kupenga, like hundreds of other residents of Ruatoria and nearby towns, became a shareholder in Hikurangi Cannabis, a start-up founded by two local men, Manu Caddie and Panapa Ehau. They say they want to bring more than 100 jobs to the area in the next two years.

Besides benefiting the town (and themselves), the founders have another goal: ensuring Māori – who make up 95 per cent of Ruatoria’s population – share in the economic gains from the medicinal cannabis industry.

When Caddie and Ehau began holding public meetings this year to solicit investment, their message – offering jobs and a chance to reverse the town’s fortunes – found an eager audience. They sold more than a million dollars in shares to area residents (often in 50-dollar bundles, the minimum purchase).

Many people in Ruatoria say they have stayed because of deep connections to the land and their community. Most speak Te Reo, and many serve at their local marae. The unspoiled scenery is ancestral Māori land, much of it now owned by family collectives.

Caddie, a former district councilor and youth worker, has led community development projects before, but this is his most ambitious. Hikurangi Cannabis, which currently employs 10 people, wants to create 120 jobs in Ruatoria in the next two years and eventually double the town’s income, Ehau said.

Residents of Ruatoria said companies had arrived promising jobs and economic growth before, and had left without delivering. But they trusted Hikurangi’s directors because they were locals.

“We’re grounded here,” Caddie said. “Someday I’ll be buried up on the hill there. I can’t imagine going anywhere else.”