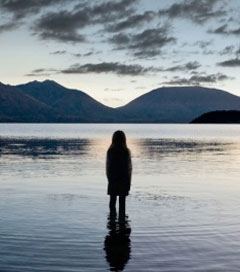 New Zealand director Jane Campion makes a ‘haunting’ and near-perfect return to TV production, according to Andrew Pulver, The Guardian’s Film Editor.  Campion’s return to high-end TV film-making comes with her directing the first three episodes of Top of the Lake – a chilling case of child abuse.  ‘On the evidence of the hour-long first installment, Campion has adjusted well on her return to the medium.’ Pulver writes favorably that ‘Campion injects proceedings with a little of that haunting small town menace’ akin to Twin Peaks. But, at the same time, Campion is ‘playing things differently.  Even with the scene-setting to get through, she means to investigate abuse, dysfunction and gender plight in concert with solving the [crime] at hand’.  Many characters, Pulver notes, are conduits to Campion’s main thread: sexism at work, ambition, and male domination. All meaty stuff for sure’ is Pulver’s summation. The TV series stars Mad Men’s Elizabeth Moss, who plays Campion’s cop, child-crime specialist Robin Griffin. The series is shot at Moke Lake, in New Zealand’s South Island. Pulver gives Campion’s Top of the Lake 4 out of 5 Stars.