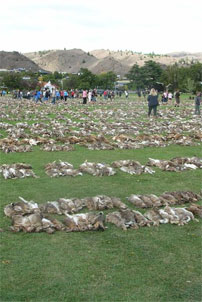 The 211 Great Easter Bunny Hunt at Alexandra’s Pioneer Park rid the local farmland of 23, bunnies over the Easter weekend. Billed as a charity event, some animal welfare groups saw the hunt, made up of 47 teams, in an entirely different light. Safe director Hans Kriek said he was against the hunt. “It’s seen as a party atmosphere, sending people out as inexperienced hunters blasting away at animals. The ones they kill are one thing; the ones they injure are another.” Event convener David Ramsay told the Otago Daily Times, “We think we’re doing something to tackle the rabbit problem and I think the majority of views, especially those of farmers, are in our favour.” See the results of The Huffington Post poll, which asked, “What do you think of the Great Easter Bunny Hunt?”