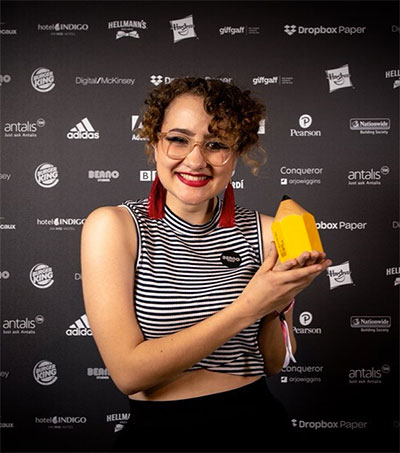 University of Otago advertising graduate Aïcha Wijland says rebellious student culture was behind her edgy, award-winning redesign of classic cartoon character Beryl the Peril – the female equivalent of Dennis the Menace. Wijland has won a prestigious Yellow Pencil award in the 2018 Design and Art Direction Awards (D&AD), in the New Blood category for emerging writers and designers.

Thousands of people from around the world enter the London-based awards every year. Wijland is the first New Zealander to win a top prize.

She took on a brief from Beano to redesign an animated version of Beryl, a character who first appeared in 1953. The cartoon was created by David Law, the creator of ‘Dennis the Menace’.

“Beryl spoke to me as she’s a very strong-willed, fearless character, a great role model for young girls,” Wijland said.

Wijland graduated last year with a graduate diploma in advertising from the University of Otago, and a bachelor in fine art from the Dunedin School of Art.