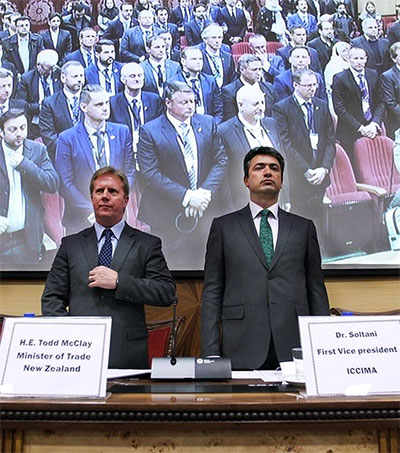 New Zealand has made its first trade mission to Tehran in 12 years after sanctions were lifted following the historic nuclear deal signed in 2015. During the meeting in Tehran, Trade Minister Todd McClay expressed hopes the two sides will witness an increase in their mutual trade valuing up to $1 billion per annum, the portal of Iran Chamber of Commerce, Industries, Mines and Agriculture (ICCIMA) reported.

During the meeting, McClay discussed available opportunities to expand ties in the Islamic Republic with the First Vice President of ICCIMA Pedram Soltani.

McClay said he invited Clark “in the interests of promoting a bipartisan approach to trade, which is critical to New Zealand’s prosperity,” the Otago Daily Times wrote.

New Zealand has a strong trade relationship, which dates back to 1975 when New Zealand established an embassy in Tehran.

“Iran has traditionally been a very important market for our sheep meat and butter however exports have diminished over a number of years. Since the lifting of UN sanctions there are now renewed opportunities to re-establish this trade as well as new opportunities in the education, construction, food and beverage, energy, forestry, specialised manufacturing and services sectors,” McClay said.