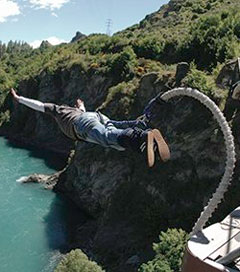 To mark the 25th anniversary of the world’s first organized bungee jump made in New Zealand, the Guardian has picked the 10 best adrenaline dives on the planet, including naturally, Queenstown’s 43-metre drop over the Kawarau Gorge.

“I still recall my first jump,” reminisces New Zealander AJ Hackett, the man who launched commercial bungee jumping. “I had the most amazing sensation.”

At the time Hackett was running a struggling ski shop but inspired by British daredevils , Hackett had begun experimenting with the adrenaline activity.

Together with his friend and fellow New Zealander Chris Sigglekow, he had started doing tests with latex rubber, climbing equipment and parachute harnesses. There was no back-up, just two guys pushing their luck.

“To see who would jump first we drew straws,” Hackett explains. “Chris lost,” Hackett adds with a grin. “But we weren’t nervous – the first jump was only 19m – it was more about hoping it would work.”

On 12 November 1988, the Kawarau Bridge bungy site (Hackett prefers bungy to bungee) opened for business. On that day 28 people took the plunge.

Since then, more than three million have followed suit at 15 Hackett sites around the world.