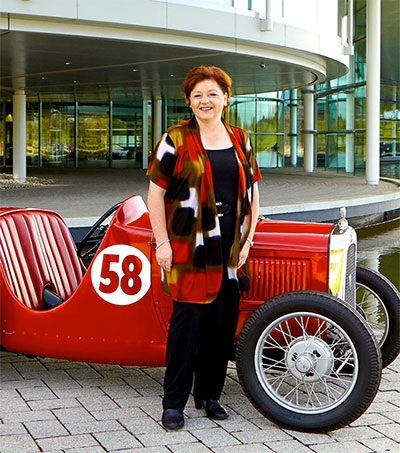 Amanda McLaren is the only child of New Zealand-born Bruce McLaren, founder of one of the most successful teams in Formula One history. She was just four years old when her father died, while testing his latest car at Goodwood in 1970, but racing continued to be a huge part of her life, as her mother, Patty, maintained her involvement in the race team into the 1980s. The UK’s Sunday Times reports.

The McLaren family home in Walton-on-Thames, Surrey, was called Muriwai, after the beach in New Zealand where her father won his first race, aged 15, and Amanda would zoom around the gardens in her little pedal car.

McLaren, 51, is now a brand ambassador for the McLaren Technology Group, in Woking, which has grown to become a renowned manufacturer of sleek supercars. That was always her father’s vision, McLaren says: “There are photographs of me as a little girl in the prototype road car Dad built, called the M6GT.”

Still going strong, with Fernando Alonso and Stoffel Vandoorne at the helm, the McLaren team has won 182 grands prix, 12 drivers’ championships and eight constructors’ titles in F1, and Bruce’s life is the subject of a new documentary.

Entitled simply McLaren, the film shows how Bruce was a talented driver, but also an engineer and inventor.

“Dad was killed doing what he loved,” McLaren says. “Mum protected me from the trauma of his death at the time and I’m incredibly proud of what my father achieved in such a short lifetime.”

In 2014, McLaren took up her role at McLaren’s headquarters. Unfortunately, a McLaren supercar wasn’t included in the package. “I own a Toyota Aygo,” she says, laughing. “My job does allow me to drive the entire McLaren range, though, so I’m very lucky. Dad may not have lived to see his own road car go into production but he would have been thrilled at what we build here now.”

McLaren will be released in UK cinemas on 25 May.