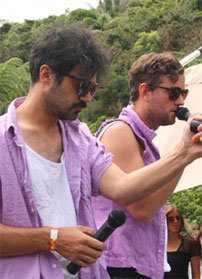 “Bounding along without a care in the world, this New Zealand band are aptly named,” the Guardian’s Michael Cragg posts in the website’s ‘New Music’ section. “If the joyously carefree and brilliantly immature Baby You’re Better (sample lyric: “She feels so good, but baby you’re wetter”) is anything to go by then Spring Break chose their name wisely. Made up of Ryan McPhun from the Ruby Suns and James Dansey form the Sneaks, Spring Break are the sort of side project that usually produces songs that are depressingly ironic or arch, but there’s something endearing about Baby You’re Better.” The single Baby You’re Better is out on 17 September via Memphis Industries.
(20 August 2012)