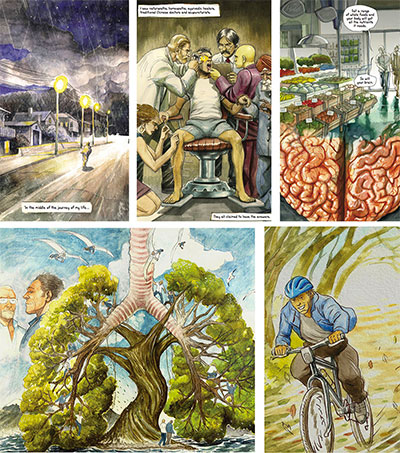 Ten years after his symptoms first took hold of him, New Zealander Brent Williams has written a graphic novel that is part memoir and part self-help book. Out of the Woods: A Journey Through Depression and Anxiety, illustrated by Korkut Öztekin, is in this format Williams explains, because it was a way to write the story simply.

He feared that a more academic approach might present an insurmountable hurdle to the very people he wanted to reach. “When I was depressed, I lost the ability to concentrate and comprehend words. But I could visualise depression and anxiety,” Williams said in an interview.

Williams became depressed when he was in his late forties. He worked in community law, creating educational resources and documentary films, but his increasingly dark turn of mind led him to hit a wall in the midst of a successful and fulfilling career. The work didn’t matter anymore; not even his family mattered. He separated from his wife, distanced himself from his four grown children, and descended into a pit of despair. Eventually, he was able to climb out, but he didn’t do it alone – nor was it a spontaneous remission where the clouds suddenly parted. It was a long slog, requiring both introspection and opening himself up to the world. And to get there, he had to accept help.

Out of the Woods is filled with twists, turns, and switchbacks on the way to recovery. In addition to his depression, Williams had to manage his anxiety, which he writes that for many people is an accompanying condition.

The simplicity of Out of the Woods is what makes it an appealing form of therapeutic education that can be effective both for those suffering from depression and anxiety as well as their loved ones. The drawings powerfully illustrate the bleak fear and hopelessness that are the hallmarks of depression, and the language used to describe emotional states is easy to grasp. The approach to healing is holistic and personal, yet clinical enough not to feel like an endorsement of yoga over appropriate medication.

“When I came out of it, it was such a contrast to how I felt when I was in it that I really wanted to tell people where I’d been, where I was hiding out. And I wanted to celebrate how good life is on the outside,” he said.

Tags: Brent Williams  graphic novel  Out of the Woods: A Journey through Depression and Anxiety  Santa Fe New Mexican