NZEDGE  >  News  >  Arts  >  Brent Williams Writes Himself Out of the Darkness 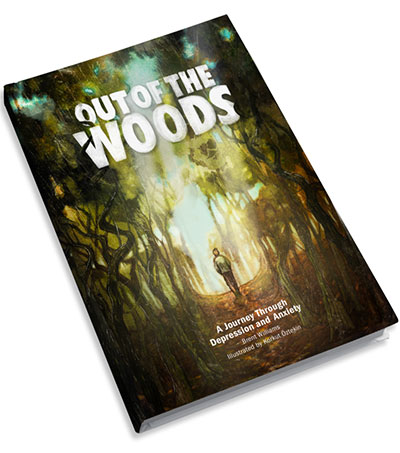 Brent Williams Writes Himself Out of the Darkness

Graphic novel, Out of the Woods: A Journey through Depression and Anxiety, by New Zealand writer Brent Williams and Turkish illustrator Korkut Öztekin, is an account of Williams’ catastrophic experience of depression and anxiety in his late forties, which drives him from his work in community law and also from his family. Bernard Caleo of the Sydney Morning Herald reviews the book.

“The book opens with Williams in a dark place, the metaphorical dark woods (Dante is quoted), and we then follow his long, slow, painful progress towards the light, through therapy and medication and a frustrating one-step-forward, two-steps-back process,” Caleo writes.

“From its modern inception, 100-plus years ago in the Pulitzer and Hearst-owned newspapers of New York, this artform has been lumbered with a seemingly-limiting name: ‘the comics.’ The funnies.

“But there have always been comics auteurs willing to use their voice to discuss darkness and demons, from Charles Schulz’s Peanuts (1950-2000) to Alison Bechdel’s Fun Home (2006). As testimony to the difficult business of living with depression, Out of the Woods … give[s] heartbreaking voice to the author[’s] life-or-death struggle with the illness.”

According to Williams’ website, he “built his career in community law creating services and resources to help vulnerable people – particularly children, young people, and victims of family violence.”

Tags: Brent Williams  graphic novel  Korkut Öztekin  Out of the Woods: A Journey through Depression and Anxiety  Sydney Morning Herald (The)