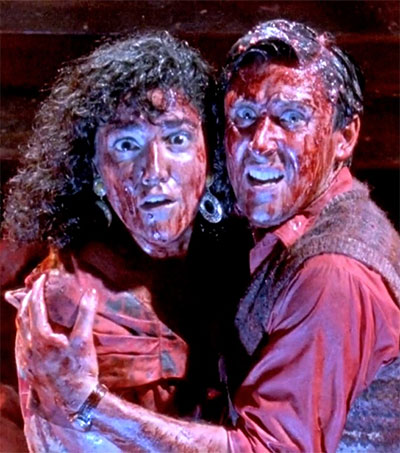 “The rebellious nature of the mid-to-late 20th-century teenager sought to expose [the] cultural constraints [of ‘taste’], deviating from the social norms to embrace the very depths of ‘bad taste’. Simultaneously, whilst yet unknown, New-Zealand born director, Peter Jackson, embraced all that the teenage population epitomised, releasing his debut film Bad Taste in 1987,” Callum Russell writes for UK publication, Far Out Magazine.

“Braindead’s camp tone spins the genre on its head, experimenting with playful, unprecedented freedoms, the conventions of the zombie sub-genre,” Russell writes. “The film works as a comedic counterweight to the darker tones of classic gore horror, parodying the anatomy of the zombie, their bodies as fragile and as light as ‘playdough’, as they hurl out the window, fly over-head and are impaled by a human fist.

“Jackson’s lack of involvement with big studio constraints meant that he could make a film for this sub-culture of bad taste with fewer strings attached, As a result, Braindead captures this blasé attitude for the serious, as well a total adoration for the fun and the frivolous, reflecting the mindset of an early ‘90s youth, rejecting social norms and embracing individuality.”