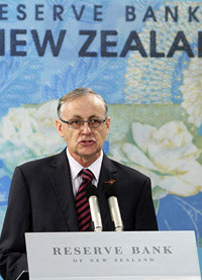 Boosting Activity in the South

Reserve Bank Governor Alan Bollard says New Zealand’s reconstruction of the earthquake-devastated city of Christchurch will boost growth and inflation pressures and may mean an increase in interest rates. Bollard is among Asia-Pacific central bankers who have held or lowered borrowing costs this year to ride out renewed threats to the global economy from Europe’s sovereign-debt crisis. The rebuild is likely to cost about $20 billion, equivalent to 10 per cent of gross domestic product, Bollard said. The high concentration of work in one region “will boost medium-term activity and inflationary pressures for an extended period,” he said. “It would therefore be inappropriate, all else equal, for monetary policy to be stimulatory during the reconstruction period.”