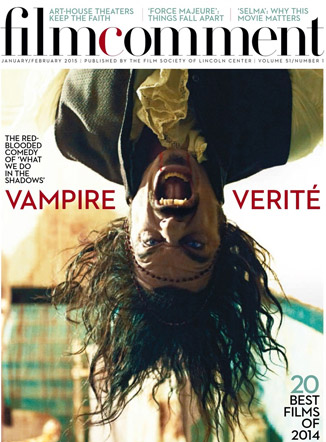 Film Comment, the magazine of the Film Society of Lincoln Center, has its January/February cover boy a blood-drenched Jemaine Clement from What We Do in the Shadows. Co-written, co-directed and co-starring Clement and Taika Waititi – old university friends who worked together on the Waititi-directed Eagle vs. Shark (2007), Boy (2010) and the beloved HBO series Flight of the Conchords – the largely improvised vampire mock-documentary began as a short film the pair made in 2006.

“A comedy from New Zealand that pulls off an extraordinary act of resuscitation, What We Do in the Shadows reanimates a subgenre that should be rights be long mouldering in the grave,” writes Film Comment’s Jonathan Romney of the movie he dubs “the Spinal Tap of the vampire comedies.”

What We Do in the Shadows uses its reality show premise to restore comic life to the undead – wedding Big Brother or The Real World with a group of ancient European vampires. Living as roommates in a suburban house in modern-day Wellington, New Zealand, this gang of ghouls come across more like college dorm slobs – bickering over the washing-up, dressing up in their best finery for weekend disco nights (unable to see their own reflections, the flatmates depend on each other’s terrible fashion advice), and rumbling with a rival gang of werewolves.

Romney heaps praise upon the comedy, reserving his highest acclaim for Waititi. “While Clement is the best-known performer in this tightly played ensemble number, it’s Waititi who really gives the star turn as the oddly childlike Viago, a melancholic, eager-to-please dandy in Lestat-style finery, who’s proud of his unholy calling and just wants to make a good impression with the film crew.”

In the same issue of Film Comment, Waititi is the focus of the magazine’s “The Last 10 Films I’ve Seen” column. In the mix is an eclectic assortment of blockbusters from last year, Hollywood Golden Age classics, and foreign language films, with The Hobbit: The Battle of the Five Armies and Guardians of the Galaxy alongside Alexander Mackendrick’s Sweet Smell of Success (1957) and Elem Klimov’s staggering Soviet Union WWII drama, Come and See (1985).

What We Do in the Shadows opens in the U.S. on February 13, just in time for Valentine’s Day.

Tags: Boy  Eagle vs Shark  Film Comment  Flight of the Conchords  Jemaine Clement  Taika Waititi  What We Do in the Shadows