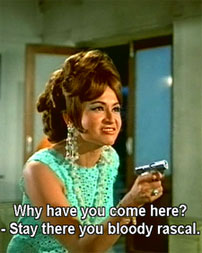 New Zealand-based Vanessa Barnes, who comes from an un-named “small provincial town”, loves Indian film, so she writes about it on her blog ‘Shahrukh is Love’, which includes reviews of over 130 Bollywood movies. Barnes says that a number of times she is “the only white face in the audience” in theatres close to her town. But once the lights are off and the film is on, it is an experience like no other. “When I went to watch the Mahesh Babu film Dookudu, I was amazed to see men throwing pieces of paper like confetti at the hero’s entrance,” says Barnes, who has to drive two hours to reach a theatre screening Indian films. She has been writing her blog since October 2009. She says her “all-time absolute favourite [Indian film] is the widely underappreciated Raavan (I even have a tattoo in its honour).”