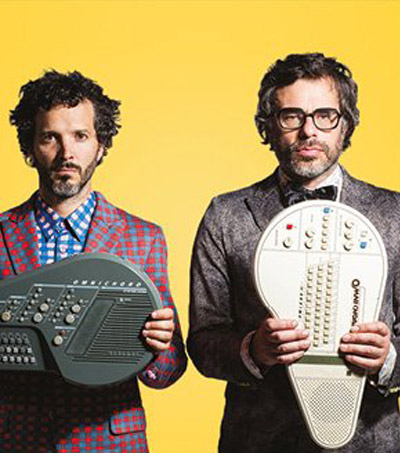 Best of Flight of the Conchords – Favourite Moments

“Is it the accents? Is it the hirsuteness? Is it the manner in which they stumble around an awkward social situation while singing a lovely / silly ditty? Just what is it that makes people fall so hard for Jemaine Clement and Bret McKenzie? We asked some musical-based acts at the Glasgow Comedy Festival to tell us what they love about Flight of the Conchords,” writes Brian Donaldson in an article for UK publication The List.

“I’m a sucker for a sexy love-song so ‘The Most Beautiful Girl (In the Room)’ ticks all my boxes. It tells most of the story from first glance to first fumble, between Jemaine and the gorgeous Sally and his overly rational / badly improvised compliments to her’,” said musical comedian Rachel Parris.

“The most underrated thing about Flight of the Conchords is just how good they are as musicians. They have a knack for perfectly capturing any genre they pay homage to from the French acoustic stylings of ‘Foux du Fafa’ to their multi-layered ‘Bowie’,” said comedian Chris Iskander, whose favourite Flight of the Conchords moment is ‘The Bus Driver Song’.

“The contrast between the gangsta rap lyrics and their uncomfortably awkward delivery is a delight to behold,” he said.

Phill Jupitus said the duo had an “incredibly effortless energy”.

“I think much like Rubberbandits, the focus for them is on making really good music before the gags. The production on both their LPs is absolutely perfect. They’re more like The Bonzo Dog Doo-Dah Band than anything else.”