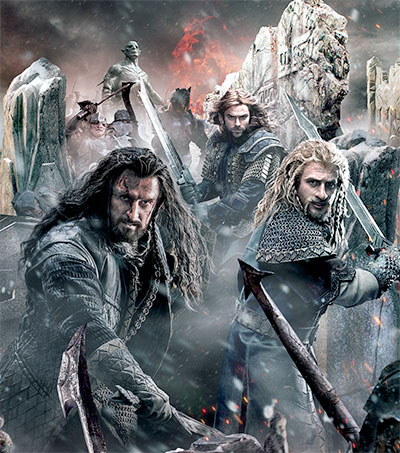 Upon its release in Britain, Peter Jackson’s The Hobbit: The Battle of the Five Armies was met with great enthusiasm, with UK newspapers agreeing the New Zealand director has completed his trilogy with verve.

“Peter Jackson has pulled it off. He has successfully concluded his outrageously steroidal inflation of Tolkien’s Hobbit into a triple-decker Middle-earth saga equivalent to the Rings trilogy, and made it something terrifically exciting and spectacular, genial and rousing, with all the cheerful spirit of Saturday morning pictures.”

At the Independent, film author and reviewer Geoffrey Macnab agrees, saying:  “The series ends in truly spectacular fashion – and with Jackson finally at full throttle.”

The Telegraph however, was less convinced conceding a mere two stars out of five describing the final film as “a series of stomping footnotes in search of a climax.”

“The trouble is that Jackson can’t make [the ‘whopping great grudge match’] mean very much: when every life on Middle-earth is seemingly at stake, few individually grab our attention. There’s more aftermath than plot left, and very little of it has to do with Bilbo (Martin Freeman), who feels increasingly like a forlorn bystander in his own franchise.”

But, back at the Guardian, Bradshaw concludes the three Hobbit films have “worn down” his “Tolkien agnosticism.”

“Although watching them now, in sequence, might disconcertingly mean that the Hobbit prelude seems of equal power and weight to the supposedly more important Rings saga. The modest subtitle to Tolkien’s original book was There and Back Again. The films have pumped this up to: “There. And there! ALSO THERE!” A multi-movie adaptation of The Silmarillion – with the last one naturally split into two parts – might test my newfound enthusiasm. For now, Bilbo Baggins’ adventures have a winning innocence and buoyancy.”

Tags: Britain release  Guardian (The)  Independent (The)  Middle Earth  Peter Jackson  Telegraph (The)  The Hobbit: The Battle of the Five Armies