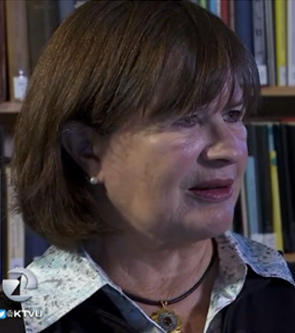 Auckland-born genetic genealogist Barbara Rae-Venter has become the go-to expert for law enforcement agencies hoping to crack the cases that defy traditional investigative methods, according to a profile in the San Francisco Chronicle by Pulitzer Prize-winning investigative reporter Matthias Gafni.

“In the year since she gained international acclaim for her work in cracking the infamous Golden State Killer case, the 70-year-old Monterey County resident has become a leading crime-fighter. She’s used her pioneering method of merging DNA science with painstaking genealogy research to help solve the coldest of killings across the country.”

Rae-Venter moved to the U.S. at age 20, earning her BA in in Psychology and Biochemistry at the University of California at San Diego in 1972. She received her Ph.D. in Biology at the same institution in 1976, and her J.D. from University of Texas at Austin Law School in 1985.

After retirement as an intellectual property attorney specializing in the patenting of biotechnology inventions, she started researching her family history as a hobby in an attempt to help an adopted family member find his birth family. She traced her history to the British Isles, Canada and Australia. In the process, she learned to do testing with 23andMe, Ancestry DNA and other tools. Through this work, she was asked to help identify a woman who had been abducted as a child. Her efforts in this case eventually identified a deceased suspect in the Bear Brook Murders in New Hampshire. Subsequently, Rae-Venter was a key member of the team who used genetic genealogy to identify a suspect, Joseph DeAngelo, in the Golden State Killer case. DeAngelo, who is charged with 13 murders and 13 rapes, although authorities believe he was responsible for many more between 1976 and 1986.

“Since DeAngelo’s arrest,” writes Gafni, “about 50 cold cases — many of which had baffled cops for decades — have been solved nationally using similar methods of running crime-scene DNA against sprawling genealogy databases, according to Paul Holes, the retired Contra Costa County forensics chief who worked with Rae-Venter on the case. Many were solved with Rae-Venter’s consultation.

“Rae-Venter is now consulting on 15 to 20 cases around the country. She can’t provide details of those in the works, for obvious reasons — police may be closing in on a subject unaware of the elaborate pursuit that is under way. But she’s had a number of high-profile successes. Each case comes with a fascinating tale of closure that has made her popular on the lecture circuit.”

In 2018 Rae-Venter was named to Nature’s 10, a list of “people who mattered” in science by the journal Nature. In his citation supporting Rae-Venter’s inclusion in Time Magazine’s 100-Most Influential People of 2019 https://time.com/collection/100-most-influential-people-2019/5567712/barbara-rae-venter/, Paul Holes wrote that “Rae-Venter has provided law enforcement with its most revolutionary tool since the advent of forensic DNA testing in the 1980s.”

The San Francisco Chronicle article records how, “using DNA collected from a Southern California murder scene linked to the Golden State Killer, Rae-Venter created a DNA profile that could be uploaded to GEDmatch. It delivered a clue — a link to a person who would turn out to be a distant relative of DeAngelo.

“For 4½ months, Holes and Rae-Venter, along with a small team of investigators, created massive family trees to map out possible suspects in the serial killing and rape case, eliminating females and anyone who didn’t match the age, location and other known particulars of the suspect. When they eventually narrowed down to DeAngelo, detectives obtained a discarded straw from his garbage and confirmed that the Citrus Heights (Sacramento County) retiree’s DNA indeed matched the genetic blueprint from the crime scene.”