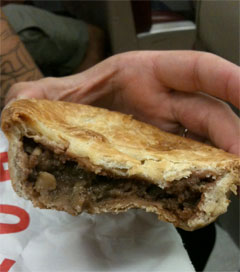 Nine years ago, New Zealand entrepreneur Gareth Hughes started Down Under Bakery (DUB) Pies in Brooklyn, New York. With his shop now selling 5000 items a week, Hughes is looking to expand and he’s decided a food truck is the way to do it. But after navigating New York City’s strict permit conditions for such a food venture, he’s come up short of cash to fund his idea. So he’s asking New Zealanders for help. The ex-Aucklander is also getting some help from some rather well known New Zealanders. Actress Melanie Lynskey of Two And A Half Men fame tweeted about Hughes’ cause with a link to his Kickstarter page. “Do you want to support a delicious New Zealand pie truck in New York? Of course you do,” Lynskey said.