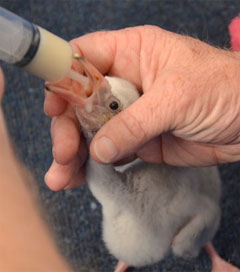 Auckland Zoo is claiming a world first after the hatching of two flamingo chicks, the first flamingos ever bred in Australasia and the first successfully bred from an entirely hand-reared flock anywhere in the world.

Exotic birds expert Michael Batty said the zoo had been waiting for the chicks since bringing the zoo’s flock of greater flamingos from the United Kingdom to New Zealand in 2001.

“These two chicks are the first in the world. It’s wonderful; we’ve achieved the circle of life,” Batty said.

Zoo official Nat Sullivan said the chicks were doing well and communicating with each other.

They still lacked the pink feathering for which the birds are famed, but that should develop over their first three years.

Apart from one in Australia, this is the only flock of flamingos in Australasia.