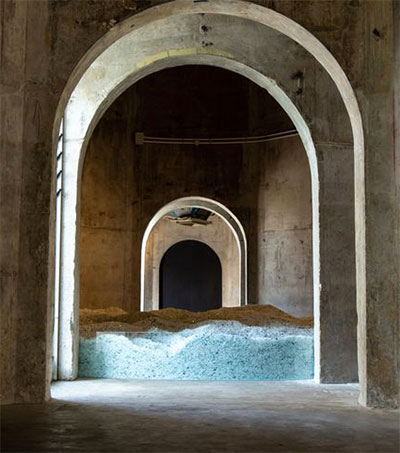 Feeney asks: The Silo, in Auckland, is a classic late-Victorian/Edwardian architectural edifice grounded in the ethos of an Industrial revolution, the expansion of Empire and global European industry. Was that important to you in deciding the kind of work that you wanted to create and, if so, surely there is a strong political agenda to Glass Ceiling, particularly feminist, but also, even more universal, a metaphor to ‘tear down the walls’?

“I chose the Silo space to transform into a central element in the sculpture, imposing but vacant and a muscular heritage container in every sense,” Gatfield explains. “Like the glass, it plays a multi-dimensional role. ‘To silo’ means to isolate a system or process from others. Located at the inner city harbour fringe, the smashed glass ceiling is set apart, made separate and distinct from its context. Subversion here results in liberation and obstruction. People cannot enter the room.

“Smashing the glass is a subversive act. With symbolic connections to violence, broken mirrors, and bad luck, this action takes down the political ‘glass ceiling,’ literally and figuratively involving risk, ego, and ambition. Over 200 million glass fragments fill the floor, revealing an operating system with no playbook. The mess is contained within a silo. Mounds of glass shards press hard against the clear panes of curved glass that span three arched doorways. These arched panes complete the circle of the Silo tower. Like a Petri dish, they set up a science experiment. The viewer could be witnessing the growing of things. Like a lens, they enable close inspection of the internal workings of the ‘glass ceiling’.”

Gatfield is a former legal practitioner. According to her website, she founded and directed Equity Works Ltd., investigating complaints of harassment and discrimination, and advised government and private sector organisations on equality and diversity strategies. She conducted research on women in the law and is author of Without Prejudice: Women in the Law. To mark 125 years of women in the law in 2016, Gatfield released a new hardback edition of the book in international suffrage colours, with the subtitle – Same Issue: New Cover.