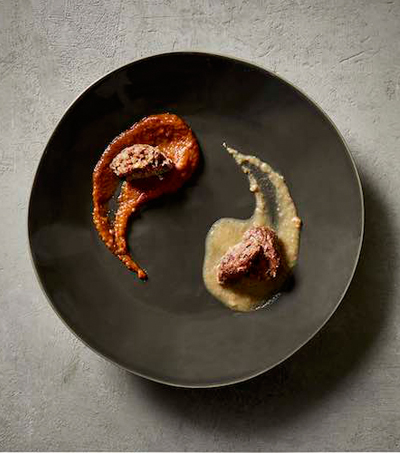 Military MREs – Meals Ready-to-Eat – from the US, China, Russia and France were transformed into stunning fine dining dishes in photo series From MRE To Michelin. The series “was created by food photographer Henry Hargreaves, videographer Jimmy Pham, and chef Chuck George, writes Imogen Blake in an article for the Daily Mail.

The food was “photographed first in the unappetising army ration pouches and then elegantly arranged on plates”. Meals included “noodles with tuna, pork brain with red sauce, and an energy bar with lemonade ‘crackle’.”

“Military meals are not something that ends up in the public eye,” said Hargreaves, who is originally from New Zealand.

“We wanted to reveal some of this, and compare how various armies feed their troops. There are many metaphors in food and how the way you people them reflects the way you feel about them.”

“As well as simply showcasing the meals that servicemen and women have to eat in the line of duty, the group wanted their series to poke fun at the seriousness of the food world, which they said can appear very trivial compared to the realities of war,” as reported in the article.

The inspiration for the series came from Chuck, the son of a US serviceman.

Hargreaves has shot a “number of food-based projects in the past – including the last meals of prisoners on Death Row, and meals that have been eaten by James Bond in various books.”