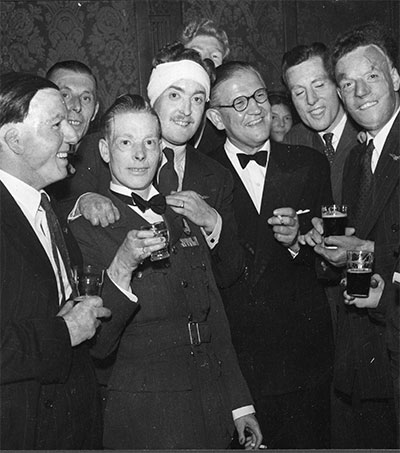 Surviving members of New Zealand-born plastic surgeon Archibald McIndoe’s Guinea Pig Club, which was formed in 1941 to cope with the ever-rising number of young pilots left with life-changing injuries, talk with the Telegraph about how McIndoe helped them rehabilitate.

In total, 649 guinea pigs came under McIndoe’s knife and he was knighted for his work in 1947. Today in Britain, just 17 are still alive.

Sandy Saunders’ injuries were so severe they were presumed a life sentence. In 1946, Saunders, now 93, was given an appointment to go and see a surgeon called Archibald McIndoe at a hospital in East Grinstead. McIndoe, a New Zealander who had moved to Britain before the outbreak of war, was fast gaining a reputation for working miracles and was seeking out the very worst cases from hospitals across Britain.

“He looked at me and held my hands and said he could do something, but it would need more operations,” Saunders recalls. “He said, ‘Go to Ward 3 and they’ll look after you. I’ll do your upper eyelids in the morning.’”

Today, Saunders’ face bears few marks from the 14 reconstructive operations he submitted to.

The only hint to what Saunders went through is a small gold pin on his blazer which he wears with pride every day. It is of a guinea pig sprouting RAF Wings.

“It shows I am a member of one of the most exclusive clubs in the world,” he says. “Because you have to have been nearly burnt to death to even apply.”

McIndoe devised a philosophy entirely of his own making, based as much on mental as physical repair and teaching his patients to have no shame in their injuries. Inside Ward 3, he installed a barrel of beer and recruited the prettiest nurses. He insisted his patients face the world and regularly sent columns of men swaddled in bandages into East Grinstead to visit the pub, local cinema or music halls. It became known as “the town that did not stare”.

These personal successes of peacetime, though far less dramatic than the war stories that brought them there, are the true legacy of Sir Archibald’s work.