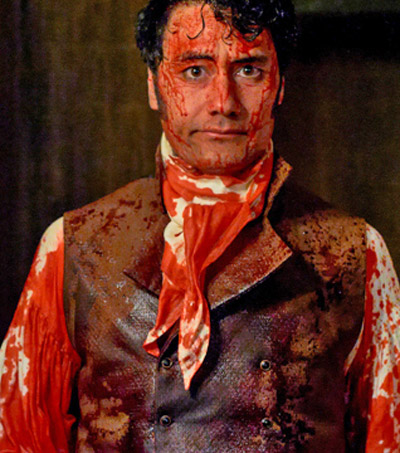 Jemaine Clement and Taika Waititi’s What We Do in the Shadows, in which vampires mix with a mockumentary crew, is rapturously reviewed by the Wall St Journal’s Joe Morgenstern.

The film, writes Morgenstern, is “a charming curiosity from New Zealand. After commercial success at home and in Australia, followed by screenings at film festivals here, this mockumentary opened last weekend in only two theaters, one each in New York and Los Angeles. Yet its spectacular per-screen business forecast more of the same during the current national rollout. Did I mention that the subject is vampires? No deep meaning or social relevance, only welcome diversion from these troubled times—i.e. superbly silly fun.

“What We Do in the Shadows is one more riff on mythical bloodsuckers, one more pseudo-factual sendup in the hallowed tradition of Christopher Guest. That said, it is also deadpan-droll, tonally flawless, graced with comic acting of an extremely high order and elating from the very first scene, which runs a witty variation on all those movies that start with an alarm clock going off. The time is 6 p.m., and the slugabed who awakens hasn’t been sleeping in a standard bed.

“His name is Viago, he is 379 years old and he’s played—as a fairly fresh-faced 17th-century dandy—by Taika Waititi, who co-wrote and co-directed the film with Jemaine Clement. Viago serves as host and guide for a film crew that, in the scheme of the mockumentary, has been granted special access to a secret society of vampires in Wellington, New Zealand, and to the society’s social event, The Unholy Masquerade.

Morgenstern writes that he “could go on, and will, without giving away any more jokes except for one of the many throwaways, a smartphone app that warns of nearby crucifixes. One reason to see the film is, I suppose, its value as an antidote to the brainsucking powers of the “Twilight” series. Yet What We Do in the Shadows has nonmedicinal virtues that many large-scale movies lack: unflagging energy, entertaining inventiveness, sustained ridiculousness and even, dare I say it, a spasm of eloquence in Deacon’s twisted tribute to the frailties of the human race.

Tags: Flight of the Conchords  Jemaine Clement  Taika Waititi  Vampire  vampire mockumentary  Wall Street Journal (The)  What We Do in the Shadows