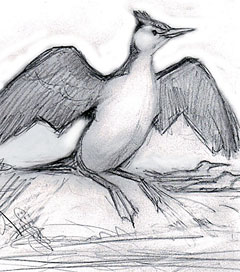 A fossil of one of the world’s oldest flying seabirds, named Australornis lovei, has been found in in greensand deposits in North Canterbury, linking New Zealand to Antarctica when it was still being formed, scientists from Canterbury Museum and Frankfurt’s Senckenberg Research Institute and Natural History Museum have announced.

The bones of the new species date from the Paleocene age, about 58 million years ago.

They were formed in the deep waters of a very warm sea off the coast of Zealandia, the continental fragment that New Zealand rests upon, shortly after the event that caused the mass extinction of the dinosaurs and many marine organisms.

“This new species is important in our understanding of bird evolution because although there are a number of bird groups described from the late Cretaceous, most belong to groups not present on earth today,” Canterbury Musuem’s Dr Paul Scofield said.