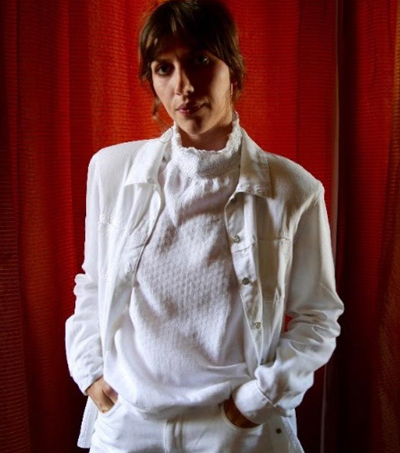 Aldous Harding Review – A Star In The Making

“New Zealand’s latest export is a compellingly theatrical performer of her extraordinary songs,” writes Kitty Empire in an article for The Guardian.

“Aldous Harding fixes a person in the front row of this tiny venue with a basilisk stare. It seems to last an age,” writes Empire. Then she announces her first song – Swell does the skull, which Empire describes as “a tapestry of specific details and oblique leaps.”

“Because Harding is nothing less than amazing – a nuanced musician, a startling writer and a presence so intense you can’t help but worry that her compelling theatricality might overshadow her other strengths,” she Empire.

“Evolved though Harding’s fingerpicking is, her colour coordination (all white, including guitar), her Chrissie Hynde fringe, her confrontational stares and her bass-faces belie the folk musician tag,” according to the article.

“The textural leap from her self-titled first album (2014, Flying Nun) to Party (4AD) is one of greatly expanded ambition: a flavour of cabaret, a little jazz.”