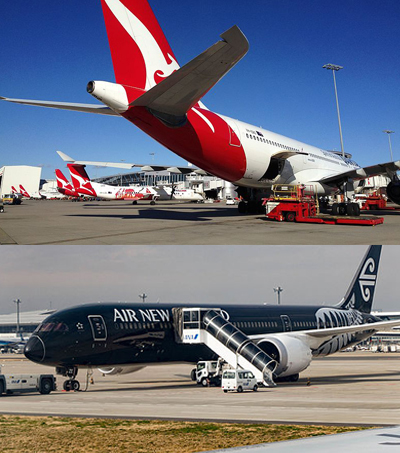 “Qantas and Air New Zealand will join forces in a codeshare partnership intended to isolate Virgin Australia, a former AirNZ ally but now common enemy to both airlines,” writes David Flynn in an article for Australian Business Traveller.

The alliance, which will take effect from October 28, “will see Qantas stamp its QF code onto 30 domestic AirNZ services across New Zealand, while the Kiwi carrier will in turn plant its NZ prefix on 85 domestic Qantas flight in Australia.”

“Our relationship with Air New Zealand goes back almost 80 years,” said Qantas CEO Alan Joyce. “We’ve been partners at various stages over that time and we have a lot of respect for them as a competitor.”

“A codeshare deal on our domestic markets makes sense for our customers because it leverages the strengths we each have in our home markets.”

“Qantas and Air New Zealand business class passengers and frequent flyers will enjoy reciprocal lounge access, and are also expected to see the ability to earn points and status credits in each airline’s respective loyalty program on flights booked under the appropriate codeshare,” reports the article.

“Trans-Tasman and other international flights are excluded from the arrangement, which remains firmly planted on each airline’s home turf.”