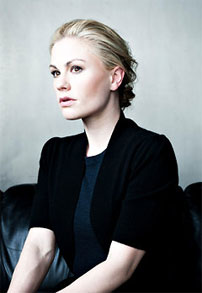 Ahead of Season Four

As anticipation builds for the June 26 season premiere of True Blood, New Zealander Anna Paquin, spoke with The New York Times about her maturation on the show as Sookie Stackhouse, an increasingly central figure on this increasingly popular, explicit-in-all-kinds-of-ways HBO series, who has comfortably outgrown her former status as a precocious phenomenon. “My job’s been my whole life. I have, almost to a fault in the past, prioritized my job over everything,” Paquin says. “It’s appropriate when you’re younger and you don’t have other things in your life that require your attention as much. I’ve always worked incredibly hard.” Paquin has received critical acclaim for her role as Sookie Stackhouse in True Blood, for which she won the 28 Golden Globe Award for Best Actress — Television Series Drama.