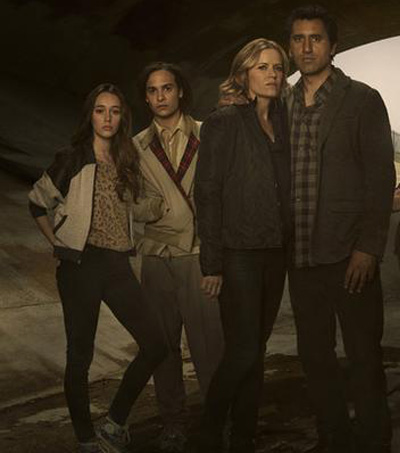 5 Reasons You Will Love ‘Fear The Walking Dead’

The Walking Dead spinoff Fear The Walking Dead featuring Kiwi actor Cliff Curtis is “a worthy successor” – “the atypical spinoff that preserves and deepens the tone of its original show”, according to Adweek, which screened the first two episodes of the spinoff series in advance.

“Fear the Walking Dead is far more confident and assured than its predecessor was in its early going. It immediately erases any doubts about its raison d’être, making a clear, compelling case for its existence alongside the original series”, writes Jason Lynch for Adweek.

Adweek has compiled five reasons why everybody should give the new spinoff series a chance.

Fear The Walking Dead tells an entirely different story than Walking Dead. The series focuses on the early stages of the zombie outbreak and the story unfolds through the eyes of high school guidance counselor Madison (Kim Dickens) and her boyfriend/co-worker, an English teacher named Travis (Cliff Curtis).

According to Adweek Fear The Walking Dead brings us closer to the characters as their story is happening in ‘our’ world rather than in Walking Dead’s post-apocalyptic setting.

2) The characters are most important.

Even though the story may have been compelling from the beginning, “it took years to warm up to the likes of Daryl, Carol, Glenn and even Rick, who were caricatures long before they became characters” in Walking Dead.  Fear The Walking Dead portrays its characters as real people, “which gives us an investment in their survival that we never had with the original.”

3) It does more in two episodes than The Strain did in two seasons.

Fear the Walking Dead nails in the first two episodes what Walking Dead wannabee The Strain tried to accomplish for two seasons: It credibly creates a world in which such an outbreak can happen, and the confusion, fear and panic that erupts in the wake of the first confusing attacks.

4) It reinvigorates the original show.

Fear the Walking Dead “serves to reinvigorate and amplify our love for the original Walking Dead because we’re finally getting a glimpse of what that show’s characters had to endure in the early going to get where they are today.”

Fear the Walking Dead deliberately builds its world before tearing it apart. “While zombies may be scarce in these early episodes, less is most definitely more, as viewers are already well-versed in just how dangerous they can be – information that none of Fear’s characters currently possess—making every appearance fraught with almost unbearable tension and menace. Is this going to be the moment where everything goes to hell? It’s a brave, and smart, show of restraint.”

Adweek predicts that the show “will get even better as its characters realize exactly what is going on.”