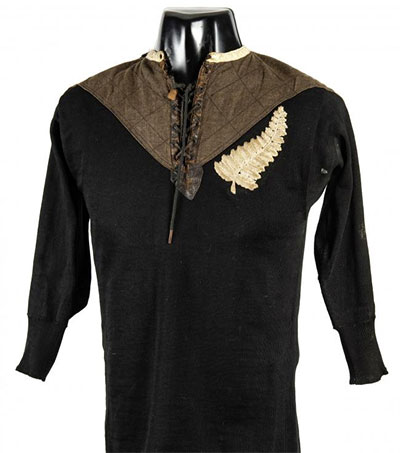 1905 All Blacks Shirt to be Auctioned in UK

An historic 114-year-old All Blacks shirt worth tens of thousands of pounds is being sold by Falmouth Rugby Club, writes Marco Ferrari for The Falmouth Packet.

The All Blacks top was swapped for Falmouth’s Edward ‘John’ Jackett’s England jersey in the first-ever test match between the two teams in 1905 (which New Zealand won 15-0).

The shirt spent years in the care of the Jackett family before being presented to Falmouth Rugby Club in the 1970s.

It survived the Falmouth Rugby Clubhouse blaze of 1978 which started when a homeless man reportedly set fire to some pamphlets to keep warm.

The club then lent it out to the Royal Cornwall Museum where it was the centrepiece of the exhibition on Cornish rugby.

Hugh Murton, a former secretary of the club, said that the true value of Jackett’s shirt was not fully realised until the museum carried out an evaluation for insurance purposes.

Murton said: “I told them what it was, and they said it was probably very valuable. A similar one had been auctioned recently for a lot of money.”

The shirt is being sold by auctioneers Graham Budd, who predict that it could go under the hammer for a final price of £30,000.

Original article by Marco Ferrari, The Falmouth Packet, May 30, 2019.

Now that the Wimbledon Championships have officially been cancelled because of the outbreak of the coronavirus and COVID-19 disease, Forbes looks at other years the world’s most famous tennis event was…