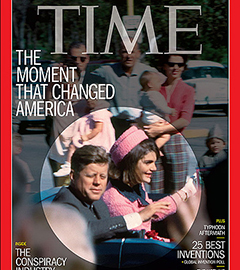 A Kiwi’s photographs capturing the last second before the assassination of President John F Kennedy in Dallas have been discovered in storage in New Zealand – and are now gracing the front cover of Time magazine. The colour pictures, taken by amateur photographer H. Warner King, feature in the 25 November edition marking the 50th anniversary of the president’s assassination in 1963.

But the late King’s photographs of the actual shooting and aftermath are missing from the collection, something his daughter, Sarah, attributes to her father’s respect for Kennedy.

“I think he may have deliberately destroyed them,” she said. “My father’s carefully numbered slides were missing the sequence immediately after [the pre-assassination motorcade shots].

“The assassination was at the forefront of my father’s mind for a long time.”

King was an amateur photographer during World War II and continued with his passion after the war while working as jewellery wholesaler in Dallas. He returned to New Zealand in 1975, after retiring, taking the colour slides with him.

He died in 2005 but it was not until recently that Sarah King was going through her father’s possessions and came across a box marked: November/December 1963 Kennedy.

Sarah was aged 10 in 1963 and told the magazine: “My dad arranged to be in town the day he heard Kennedy was coming to Dallas because he wanted to take pictures. He knew Dallas really well and he knew where to go to get close to the motorcade.

“The cars passed him and he photographed John and Jackie,” she said. “In one photo, they’re smiling right at him.”