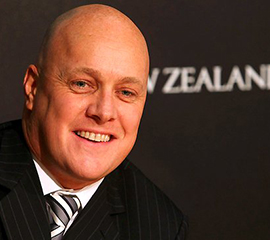 The last time Air New Zealand invested in the Australian aviation market, the airline required a Government bail-out to stave off bankruptcy as its subsidiary Ansett fell apart. This time round, it’s Air New Zealand’s Australian rival Qantas that is on shaky financial ground, while our national airline is flying high.

Fresh from posting a 29% rise in a record interim pre-tax profit of S180 million, chief executive Christopher Luxon says it may provide more funding to Virgin Australian Holdings, in which it is the largest shareholder, as it takes the fight to embattled Qantas.

“We have obviously participated in the capital raising before Christmas,” Luxon told the Sydney Morning Herald’s Jamie Freed. Virgin raised A$350m, a move that so rattled Qantas it sought federal government aid.

“That [funding] has been important to buttress and strengthen the [Virgin] balance sheet – we are there for the long haul,” Luxon said.

Virgin has yet to post its results but analysts expect a A$49m pre-tax loss. Luxon said he expects Virgin to be a long-term profitable prospect but would not be drawn on whether losses could be sustained for three-five years.

Qantas has posted a first-half loss of A$235m, citing tougher competition and said it will axe 5,000 jobs.

Air New Zealand’s other partners in Virgin are Singapore Airlines and Middle East aviation company, Etihad Airways. Luxon has a formal alliance with Singapore but said there was no move to strengthen ties with Etihad.

Luxon, in The Weekend Australian, has also hit out at Qantas, accusing executives of manufacturing a crisis to deflect attention from its own issues: “I think it’s quite outrageous and frankly quite offensive to be positioning Air New Zealand as a predatory state-owned airline wanting to cripple and hurt Qantas.

“Our strategic rationale for investing in Virgin is extremely clear and has remained unchanged,” he told The Australian’s Steve Creedy. “We want to be able to have exposure to markets across the whole of the Pacific Rim and weight our assets and our market risk accordingly.

“The other thing for us is it’s a natural investment because it’s a very large connected, adjacent market to New Zealand.”