The first legs of the 3km New Zealand Cycle Trail have been opened between Ruapehu and Whanganui. This 242km section of the trail will take four to six days to ride, with varying levels…

The New Zealand Geographic Board has announced the River City, Wanganui should be spelled Whanganui, after considering an application by Whanganui iwi, Te Runanga o Tupoho. This single letter has raised the ire of… 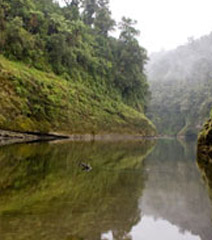 I start this blog on Labour Day. I’m just back at Waiohiki from a Black Power hui near Rotorua, including a challenge for the Gabe Tawhaiti – and I’ll come back to that in…

A Long Way to Deliver a Letter

Jules Brown from The Observer takes a scenic trip up the stunning Whanganui river on some rather usual transport – a mail bus.