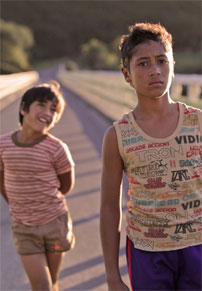 “While New Zealand may primarily be known as the setting of the Lord of the Rings franchise and having tons of sheep, one look at the lineup of the first-ever New Zealand Film Festival is enough…

Variation the key to “Briwi’s” success

NZ born popster Daniel Bedingfield profiled in the Philippine Star. “You know how an artist will go to great lengths to maintain his style and keep some elements of his first hit in all…

In-depth spread on NZ in The Philippine Star dubs us “the adventure playground that thinks it’s a country”: “The beauty, the serenity, the vivacity of the greens, the freshness of the blues and the translucency of…

“They Kiss With Their Noses in New Zealand”

In an exploration of social climbing etiquette the Philippine Star explores the kissing conventions around the globe, from the Latin influenced beso-beso, to hand kissing in France, to bowing in Japan to Maori hongi in New…

Asked to describe his most memorable trip, Dodo Cu-Unjieng, CEO of Philippine Fujitsu Xerox, answers (of course): New Zealand. “We were constantly overwhelmed by the beauty of the country. We would comment that when God…