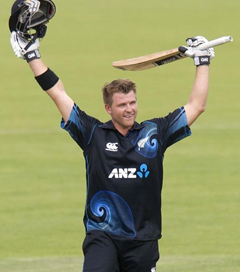 23-year-old New Zealand batsman, Corey Anderson, has hit the fastest century in the history of one-day international cricket from just 36 balls. Playing on New Year’s Day against the West Indies in Queenstown, Anderson…

Former Black Caps test captain and coach of India from 2 to 25, John Wright is the new coach of the New Zealand cricket team, taking over from Mark Greatbach beginning with the Boxing…

“Daniel Vettori is a prime example of what talent coupled with hard work can achieve,” writes Partab Ramchand for DreamCricket.com. “A cricketer is obviously gifted when he is thought good enough to make his Test debut at…

The Black Caps won a thrilling one-day international series against Pakistan 4-1, with captain Stephen Fleming leading by example. Highlights included an unbeaten century by Scott Styris in the first match, another by…

Prescon Technology Limited has been chosen to introduce quality Compressed Natural Gas equipment to Pakistan, as well as introducing new and cheap water filters for domestic and commercial treatment plants. The aim of the enterprise is to…

McKinnon Asserts Himself in New Role