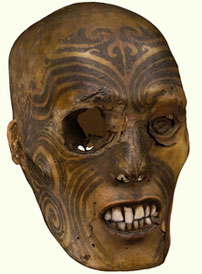 France will return some 20 mummified heads of Maori warriors still held by its museums back to New Zealand at a ceremony in January. The restitution follows a four-year political struggle which ended in…

The 100% Pure New Zealand Ora – garden of wellbeing, won one of four gold medals at the Chelsea Flower Show in London. The garden was designed by Kim Jarrett, Trish Waugh and Lionel Grant, and…

A NZ themed garden is to feature at the most prestigious horticultural event of the year – the RHS Chelsea Garden Show, May 25-8. The 100% Pure NZ Ora Garden of well-being is inspired by Maori mythology…

Backwards Into the Future

“The past is not found in the days gone by, but in the days that sit in front of us,” says Moana Jackson, stating the Maori view of the past during the opening address…

A beer ad showing beach babes “going native”, (doing a haka), has been withdrawn from British TV after being branded insensitive and racist.

“Ta moko exposes more than the revival of a tradition – it reveals the beauty of Maori past and the promise of Maori future.” – photographer Hans Neleman in Moko-Maori Tattoo.

Hitting Sex Criminals Where it Hurts

Maori activist Titewhai Harawira has recommended a traditional Maori punishment for sex criminals to ensure that they don’t re-offend: Her solution: tying flax around the offender’s penis and pulling until the penis drops off. “I’m sick of…