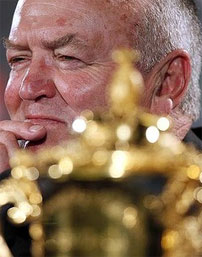 Wellington-born Peter Leitch, known to his fans as the “Mad Butcher”, has received a knighthood in this year’s Queen’s Birthday Honours. Leitch, a butcher, former gravedigger and avid rugby league fan, says…

New Zealand three-time Olympic gold medalist Dr Peter Snell, who is based in Dallas, was honoured twice this year for his athletic career. Snell was knighted in August and his likeness commemorated in a…