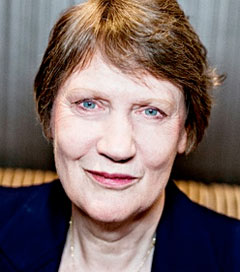 The World Could Do with More Helen Clarks

Clark is getting ready to attend the World Economic Forum in Davos. “It’s the same story every year,” she says. “Under 20 per cent of the people going are women.” Actually the figure is closer to 15 per cent, Peacock inform her, to which Clarke can only rolls her eyes.

One of the reasons Clark avoided sexist treatment in politics, she presumes, is because she became known as being “strong” and somebody not to mess with.

Being strong and sticking to your will – “you have to make a decision and implement it, you don’t then wobble on that decision, you get on with it” – is a trait Clark shares with Britain’s only female Prime Minister to date, Margaret Thatcher. Does Clark see similarities in her own leadership style with the Iron Lady?

“Obviously her politics would not appeal to me at all, but you recognise she had this iron will. She had a tremendous strength of character.”

Clark has become very good at taking the emotion out of decision making, but she’s always remained true to herself, adding that she doesn’t believe you have to “act like a man” to get ahead in politics.

Politics is “not for the faint hearted,” she says, adding that anyone who goes into it must make sure it’s fundamentally what they want to do in life. “You’ve got to work out your priorities,” she says.

The world could do with more Helen Clarks, but until that day comes, she is still in prime position to take the lead – and show us how it’s done.

Clark delivered the annual Women of the Year lecture at the Royal Institution of Great Britain on 20 January.

Photo by Sarah Lee for the Guardian.