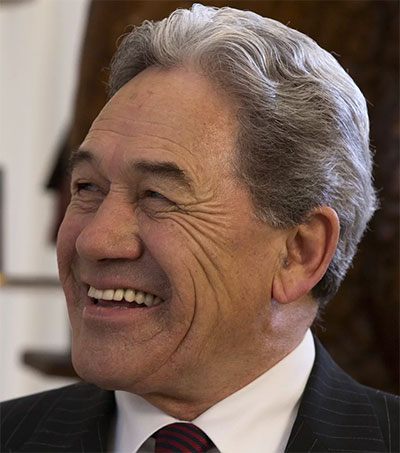 The ascension of power will be a curious one for Deputy Prime Minister Winston Peters who, at times through his career, has looked like he could take the role with ease and at others like he has actively sabotaged for himself, Charles Anderson writes for The Guardian.

Peters and his minority party, NZ First, have often been in positions of consequence – lending support to major parties and allowing them to tip the balance of power in New Zealand’s MMP electoral system. It has lent him the oft-used nickname the “kingmaker,” which he became last year after throwing his support behind Labour. In return he became deputy prime minister and foreign minister, minister for state owned enterprises and minister for racing.

In each of these cases he has demanded a price – often with the stipulation that he is offered top cabinet jobs in new governments. He has been foreign minister, representing New Zealand’s interest on the world stage, and deputy prime minister before. In 1996, he secured the job for the right-leaning National-led government. He was kicked out from the role two years later after a leadership challenge from Jenny Shipley, the woman who would become the country’s first female prime minister.

“Winston could have been prime minister but for want of himself,” Shipley told Radio New Zealand last year, as part of the broadcaster’s “9th floor” interview series. “His complexity often got ahead of his capability. Watching him on a good day he was brilliant,” she said.

More recently, however, he has sued heads of his own government’s departments after details of his superannuation overpayment were last year leaked to media. Peters is seeking $1.8m in damages for the leak from, among others, the attorney general David Parker, who Peters will direct in cabinet after this weekend.

This week he also called for “heads to roll” at the huge dairy cooperative, Fonterra, which is New Zealand’s largest company. In March, Fonterra announced its first ever loss – $348m for the six months to September.

“A massive hundreds of hundreds of millions of dollars loss needs an explanation … there needs to be some accountability,” Peters said. “It goes to the top and the buck stops there.”

After Jacinda Ardern gives birth, it will for Peters, too.