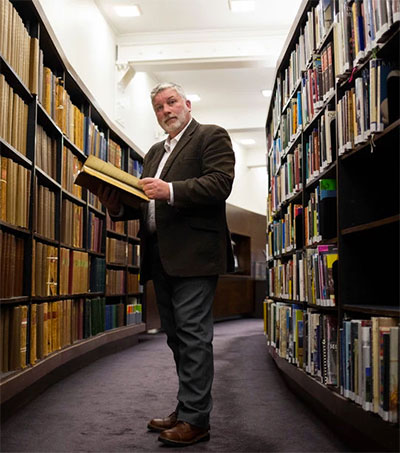 In the grand library of the Auckland War Memorial Museum on a Saturday morning in August, a small group of new and slightly nervous Wikipedia editors gathered for a day of training that would arm them to tackle New Zealand’s lacklustre representation on the crowdsourced online encyclopedia. Leading the so-called Wikiblitz was New Zealand’s official Wikipedian-at-Large, Mike Dickison.

Dickison, 49, who has in some senses been preparing his entire life for this post. As a collector of things and knowledge, he has pursued a string of enthusiasms, beginning with insects, shells and feathers (he put together his own museum as a boy), then giant flightless birds (a PhD on those), that ended, appropriately enough, with a job as the natural history curator at a museum. He once taught a class in knitting as therapy for stressed-out men after a major earthquake.

For the moment, he was involved in something a little less fascinating, guiding the group through the process of adding photos from the museum’s collection to pages on Wikipedia. The new editors – curious members of the public, many of whom had created their accounts the evening before – were mostly women, a fact Dickison was pleased to note; Wikipedia records its editors as 90 per cent male.

“Be bold! Don’t be stymied by worry,” Dickison told the group, assuring them that early in his Wikipedia career, he had accidentally “blanked” more than one entire page by mistake.

As the country’s roving Wikipedian-at-Large, he is spending a year coaxing New Zealanders to take up volunteer editing on what is the world’s fifth-most-visited website. His salary and travel are funded by a grant from the Wikimedia Foundation, the nonprofit that runs Wikipedia, as part of its investment in “emerging communities” on the site, including New Zealand.

“I feel like we’ve been a bit cavalier about looking after knowledge in New Zealand,” Dickison said. “Too often, it just slips away.”

As part of his Wikipedian-at-Large role, he is charged with recruiting others to help preserve that knowledge online, with a particular emphasis on women and minorities, who are underrepresented in New Zealand’s small editing community. He plans more meet-ups and training sessions like the one at Auckland Museum, and will be resident around the country at locations including a government department and a bird sanctuary.

Dickison also hopes to entice reticent public and private institutions to crack open their vaults of knowledge and expertise, making them more accessible for editors to use while editing Wikipedia.

“I often have experts tell me they read a Wikipedia article that they know something about and it was full of inaccuracies,” he said.

“I always say, ‘Well, did you fix them? And if you didn’t fix them, why are you complaining to me? It’s like walking outside and complaining that it’s raining and not putting up an umbrella. Of course you’re wet!’”