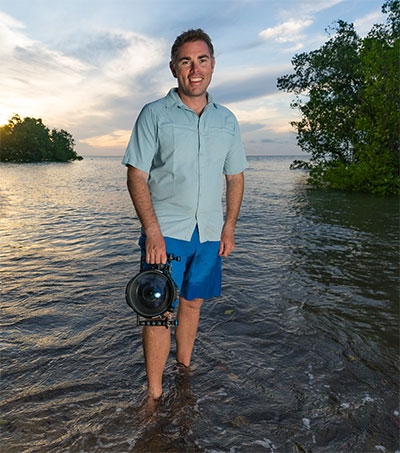 New Plymouth-born head of the Marine Megafauna Foundation and leading authority on whale sharks Simon Pierce has been overseeing a project on Nosy Be, an island off the northwestern coast of Madagascar, where there are “more whale sharks there than anybody realised”.

Pierce has been working with young Belgian conservation biologist, Stella Diamant, a graduate from Warwick University, who in 2016 identified 85 whale sharks during the three months from mid-September that they spend feeding on the shoals of tiny fish off Nosy Be (each whale shark has its own unique set of markings). In 2017 she identified a further 115. By the end of 2018, with the help of Les Baleines Rand’eau, she had found more than 280.

“I was highly impressed. It meant this was a pretty significant hot spot,” Pierce told Telegraph reporter Martin Fletcher as the trio headed north from Nosy Be on a catamaran. There were scarcely 30 such locations left in the world, he said, and even fewer where adventurous tourists could swim with the whale sharks.

Over the next two days, Pierce, Diamant and Fletcher sailed to the remote archipelago of Mitsio, about 65km away, to see whether there were more whale sharks feeding there. It was a memorable voyage. They saw flying fish and sailfish, dolphins, a leopard shark, a manta ray and a pair of Omura’s whales – a species so rare that they were only officially recognised in 2003. They watched two humpback whales breaching, spouting and exuberantly slapping the water with their tails. Their crew caught barracuda and Spanish mackerel, which they ate grilled and as ceviche barely an hour after they were hauled from the water.

They saw no whale sharks, but Fletcher learnt a lot about those remarkable creatures from Pierce and Diamant. Or, more accurately, he learnt how little is known about them. Almost all the whale sharks who feed off Nosy Be – and in the world’s other coastal hot spots – for two or three months each year are juvenile males under the age of 30. Where they go for the rest of the year, and where female and adult male whale sharks dwell, is a mystery, though the best bet is that they live far offshore in the Pacific and Indian oceans. “They’re the biggest fish in the sea, but the oceans are even bigger,” says Diamant, who is tagging a few in an effort to find out more.

We know they dive deeper than any other fish, and that one tagged whale shark reached a depth of 1927m, but nobody knows why.

Pierce calls them “Labradors of the sea”. “There are no other animals of that size you can interact with in complete safety and with no training,” he says. “Not only are they placid but they’re completely adorable. Everyone comes away as ambassadors for whale sharks. It changes people’s lives.”

Now, increasingly, tourists are coming to swim with Nosy Be’s newly discovered whale sharks – the fish the Malagasy people call marokintana (“many stars”) after the markings on their backs.

Normally such an influx would fill conservationists with alarm. Too often tourism destroys the very wonders that it feeds off. But happily Pierce and Diamant insist that precisely the opposite is true in the case of Nosy Be’s whale sharks. Counter-intuitively, they argue that well-managed tourism offers the best hope of protecting Nosy Be’s rare and priceless aggregation of those giant fish.

“Tourism creates an economic incentive for conservation and management. It is really useful for whale shark conservation. It’s a $100 million industry around the world, and provides a clear argument for protecting the species,” Pierce contends.

Pierce is a co-chair for the Sub-Equatorial Africa region within the IUCN Shark Specialist Group, Science Advisor to Wild Me, and a founding board member of the Sawfish Conservation Society.

He is also an award-winning marine wildlife photographer. One of his photographs was chosen as a personal favourite of Sir David Attenborough’s, in conjunction with BBC’s Blue Planet II series.