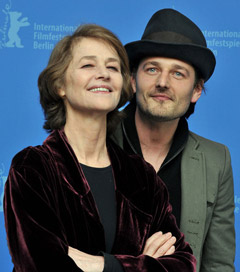 New Zealand-born director Barnaby Southcombe, 40, has cast his mother, English actress Charlotte Rampling, 66, in the title role of his latest film, I, Anna. The adapted screenplay was written by Southcombe based on the American novel I, Anna by Elsa Lewin. The film marks their first collaboration. Rampling’s character, Anna Welles, is a woman whose apparent involvement in a murder case intrigues a detective, played by Gabriel Byrne. “I had always imagined my mother in the part,” Southcombe says. “I sort of took it as read that it was the right part at the right time of her life.” I, Anna is Southcombe’s feature debut after a decade of work in television, including episodes of Teachers, Bad Girls and Footballers’ Wives. I, Anna is out in the UK on 7 December.