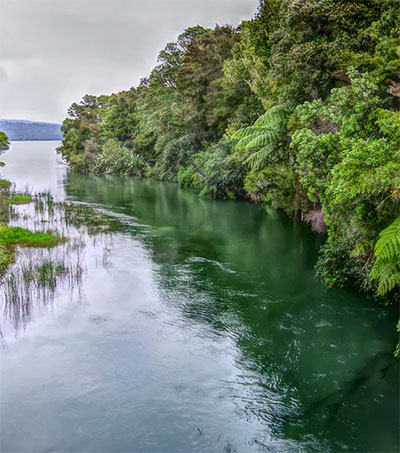 Ways to Better Water Quality in NZ Lakes and Rivers

“Two years ago, New Zealanders were shocked when contaminated drinking water sickened more than 5000 people in the small town of Havelock North, with a population of 14,000,” writes Professor Troy Baisden, chair of Lake and Freshwater Sciences at the University of Waikato in an article featured in The Conversation.

“A government inquiry found that sheep faeces were the likely source of bacterial pathogens, which entered an aquifer when heavy rain flooded surrounding farmland.

“A second phase of the inquiry identified six principles of international drinking water security that had been bypassed. Had they been followed, the drinking water contamination would have been prevented or greatly reduced.”

In the article, Baisden asks “if the approach recommended by the Havelock North inquiry to prevent drinking water contamination can be extended to reduce the impacts of nutrient contamination of freshwater ecosystems”.

An important lesson from the Havelock North inquiry is that sometimes there is no recipe – no easy list of steps or rules we can take to work through a problem,” he says. “Following existing rules resulted in a public health disaster. Instead, practitioners need to follow principles, and be mindful that rules can have exceptions.

“Second, drinking water safety follows a clear logic from the starting point: ‘protecting the integrity of source water is paramount’.

“The fourth principle of drinking water safety was perhaps the most dramatic failure in the Havelock North drinking water crisis: ‘change precedes contamination’.

“A fifth principle for drinking water seems obvious: ‘suppliers must own the safety of drinking water’. Clear ownership results in clear responsibility.

“The final principle of drinking water safety is to ‘apply preventative risk management’. This is a scaled approach that involves thinking ahead of problems to assess risks that can be mitigated at each barrier to contamination.

“If we can focus on these principles, government, industry, researchers, NGOs and the concerned public can build understanding and consensus together, enabling progress towards halting and reversing the declining health and quality of our rivers and lakes.”