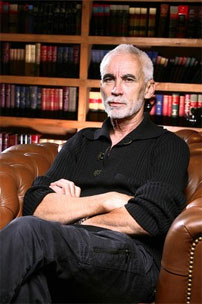 Wellington-born director Lee Tamahori insists that his scripts are already dripping with violence when he gets them. His latest movie, The Devil’s Double tells the story of Latif Yahia, an Iraqi military officer who is forced to become the body double of Saddam Hussein’s depraved son, Uday. Tamahori says he actually toned down the script to make it more palatable to viewers. “This guy was 50 times worse than anything we’ve done in the film,” Tamahori says. “In Once Were Warriors, we used very few cuts. I had an ex-bouncer from Glasgow as the stunt coordinator. Glasgow breeds the toughest streetfighters in all of Scotland. The brawling in pubs is almost legendary. I told him I wanted that style of fighting. In a barroom brawl, you hit him before he hits you and you hit him with everything you’ve got and when he’s down, you make sure he’s unconscious. That’s the simple basic rule of all street fighting. When the movie was released, people would come up to me, boxers, wrestlers, people who had training in hand-to-hand combat, and say, ‘that is the most realistic film I’ve ever seen.’”

Tags: Devil's Double (The)  Lee Tamahori  Once Were Warriors  Wall Street Journal (The)