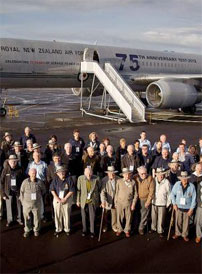 New Zealand World War II airmen were among 800 veterans present at Green Park, London for the Queen’s unveiling of a memorial sculpted by Scotsman Philip Jackson. New Zealand paid for 39 veterans, aged between 87 and 94, to make the trip, where they were joined by 80 Australians, 54 Canadians, and others from France, Poland, Norway and Slovakia. All of them had one intention: to honour the sacrifice made by husbands, fathers and comrades doing their duty as they flew with Bomber Command. All 125,000 men who served with Bomber Command were volunteers, with an average age of 22. Jack (Waky) Wakefield, of Blenheim, aged 90, said: “This memorial is not for us, it’s for our friends and the 55,000 who paid the supreme sacrifice, we represent them.”