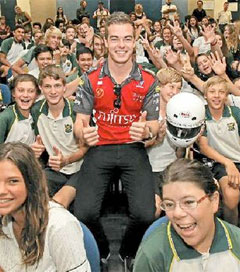 Christchurch-born McLaughlin made his V8 Supercar debut at the tender age of 16, not much older than the Year 9 students he stood before.

He said while screaming around the track at 300kmh looked exciting, driving on public roads was a completely different prospect.

McLaughlin, who just got off his P plates, also said V8 Supercar drivers had strict off-course road rules placed on them and that he would lose his spot in the series if he lost his licence.

“The best thing about a race circuit is that the cars are very safe, but you’re also all going in the same direction on the track,” he said.