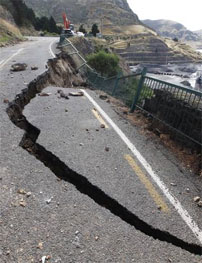 Deon Swiggs, 25-year-old director of the fledgling nonprofit Rebuild Christchurch, talks to the Los Angeles Times about how New Zealanders are coping one year after a massive magnitude 6.3 earthquake killed 185 people and destroyed much of downtown Christchurch. “The roads in eastern Christchurch are still very bumpy,” Swiggs says. “Downtown, there’re lots of buildings that have yet to come down. Probably about six or seven blocks are under cordon. We keep having earthquakes. We just had another major earthquake two months ago. Every time there are new earthquakes like that, the authorities have to reassess all the buildings that are up to see if they’re safe. The earthquakes at the moment, the size and the scale, are pretty unprecedented. In June, we decided to set up a charity and I decided to work on Rebuild Christchurch full time. I’ve been working on it ever since. It’s not easy. But we’ve got to keep going.”